You are here: Home / Uncategorized / An Open Letter To Black Christian Conservatives

I love everyone and have close friends who are democrats, republicans, liberals, progressives, conservatives, libertarians, and independents. I have been affiliated with both the Democrat and Republican parties. Ideologically, I agree with many black Christian conservatives on many issues but progressive on racial matters. I am progressive on racial issues because African Americans shouldn’t work to conserve racism. That’s utter foolishness. Today, I am happily unaffiliated with any political party or group. My commitment is to the Kingdom of God. 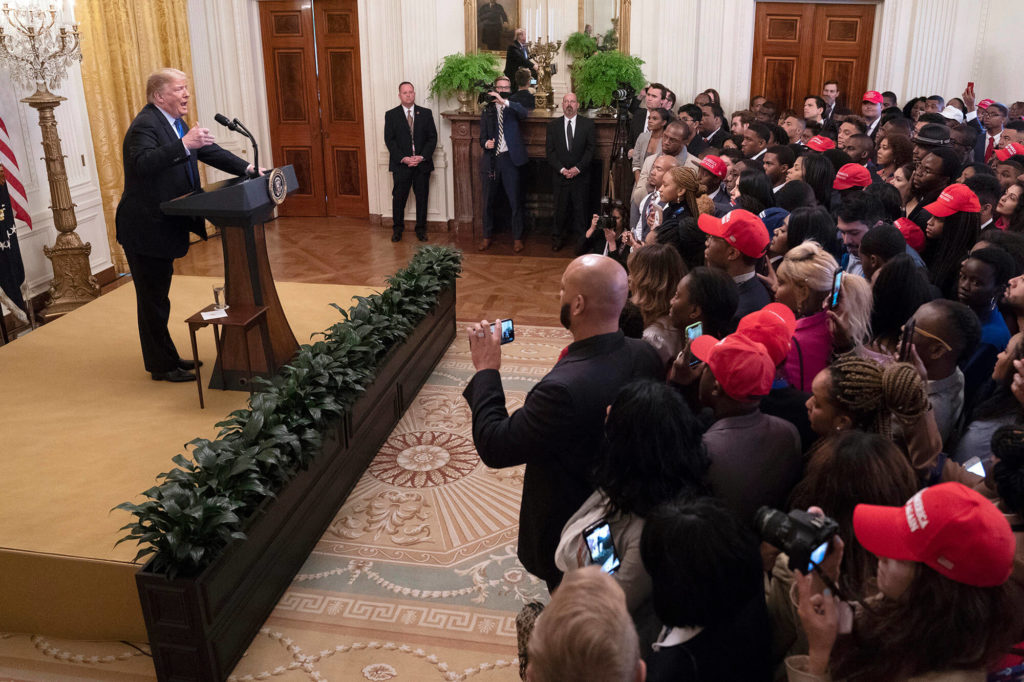 To be frank, I cannot fathom and comprehend the ignorance, extremism and willful blindness that characterize some black Christian conservatives. They’re in the dubious and shameful position of defending the indefensible racist and white supremacist behavior and policies of Donald Trump.  I pity these types of black conservatives but history is filled with them. They existed during slavery defending the plantation owners while stabbing in the backs the slaves in the field. Stephen, the character Samuel Jackson portrayed in the movie Django, is a very fitting image of these black conservatives.

Ignorance is the lack of knowledge, understanding or information. It’s the first reason some black conservatives are not appalled by white supremacy and institutionalized racism. I’ll try to explain.

Black conservatives who aren’t repulsed by white supremacy and institutionalized racism are presumably ignorant of the past and present-day impact of these evils on people of color. A visit to Africa and other nations to witness firsthand the terrible impact of white supremacy would be advantageous for these black conservatives. And reading books such as (1) How Europe Underdeveloped Africa or (2) The Destruction of Black Civilization or (3) The Wretched of the Earth, just to name a few, may be beneficial too.

The online Collins dictionary defines self-hatred as hatred directed against oneself or one’s own people. It’s absolutely correct that some blacks hate being black. They loathe black culture, black physical features (hair, lips, skin) and everything else associated with being black.

The history of black self-hatred runs deep in America. From the founding of America, whites have taken every opportunity to demean and attack blackness. They wrote in dictionaries that black is ugly, dirty, soiled, sinister, wicked, condemned, discredited, angry, gloomy, devilish, hostile and so on. On the other hand, they wrote that white is good, possessing moral character, uprightness, fair, pure, harmless, favored, fortunate, conservative, free from spot, perfect, innocent and so on.

The media is especially notorious for perpetrating lies and myths about blackness. It portrays whites with very positive images but its portrayal of blacks is horrible. For example, it portrays blacks as thugs, welfare queens, criminals, poorly educated, inarticulate and in other derogatory ways. To the uninformed this negative portrayal of blackness is fact. Hence, it’s no mystery that many blacks including some black conservatives exhibit self-hatred.

You hear the self-hatred of some black conservatives when they repeat racial slurs against blacks. For example, they opine that blacks are loyal democrats because they are lazy, on welfare and always want government handouts. Why would a black person stoop so low and repeat such stereotypical, false, ignorant, broad and anecdotal statements about other blacks? Why do they allow themselves to become ventriloquist dummies for white supremacists? Again, the answer is self-hatred, the remnants of a slave mentality, a stepping and fetching attitude. Such Uncle Tom, self-loathing behavior makes white supremacists, like Donald Trump, secretly chuckle at all blacks.

Greed is another reason many black conservatives are willfully blind to the horrific impact of white supremacy and institutionalized racism. The greed and selfishness is evidenced when they make statements such as, “My family and I are doing well, who cares about white supremacy. It cannot be that bad.”

This selfish attitude is the antithesis of the prophetic voices of Rev. Dr. Martin Luther King Jr., Dr. Benjamin Mays, Rev. Samuel Protoctor, Rev. Benjamin Hooks, Rev. Jesse Jackson and many others. These men of God didn’t defend and show obeisance to white supremacy. They used their pulpits to speak truth to power. They pursued justice for the weak and oppressed.

For all the above reasons, many black Christian conservatives falsely view outspoken and informed blacks as race baiting, fear mongering, rocking the boat, upsetting the status quo or stirring up trouble. However, these same black Christian conservatives are silent as Donald Trump uses race and fear to incite and exploit the grievances and fears of white Americans. They’re silent as Trump pushes our country closer to a full-throttle race war. I’ll say more on race wars below.

Deception is the fourth reason many black conservatives support white supremacy and institutionalized racism. Here’s what I mean. Have you ever heard of Lee Atwater, Jerry Falwell, or Paul Weyrich? These men created the religious right movement after the Brown v. Board of Education court decision. Like most whites, they hated integration and refused to permit their children to share classrooms with black children. Hence, they helped create segregated white schools.

In response, Blacks sued segregated white schools pursuant to Brown. The IRS revoked the tax-exempt status of some all-white schools. Southern whites felt the federal judiciary was their nemesis and knew they had to fight back or lose their way of life. They also knew it was necessary to publicly unite around an issue other than segregation since it has racist connotations.  They chose abortion and dubbed their cause the “pro-life” movement. Eventually, they called themselves the Moral Majority. They talked incessantly about abortion and family values, but their real goal was to use abortion as a public masquerade so they could wage an in clandestine war to maintain segregation and racial superiority.

Here’s more evidence that many black conservatives are deceived. Recently, a group of black pastors met Trump at the white house. One attendee, Pastor Darrel Scott, stupidly claimed Trump is the most pro-black president ever. The other pastors took turn applauding Trump in spite of the blatant racist statements Trump has made about blacks. Similarly, a group of young black conservatives met Trump at the White House. They enthusiastically cheered for Trump. I cringed and wept as I saw both debacles! Subsequent, to these laughable events, Trump’s former personal confidant, Omarosa Manigault, and former personal lawyer, Michal Cohen, both reported they heard Trump make several racist statements about blacks.

For the record, my stance on abortion is well known, i.e., I am strongly opposed to abortions. Abortions are reprehensible but so is white supremacy. As a Christian, I fight against both evils since they equally devalue life.

The fifth reason some black Christian conservatives are blind to white supremacy and institutionalized racism is they’re Scripturally unbalanced. The unbalance comes from them heavily opposing abortion and gay marriage (righteousness) but ignoring racial injustice (justice). This unbalance approach contradicts the character of God because He places righteousness and justice on equal footing. How do we know this? Because the Bible expressly tells us so.

King David wrote in Psalm 89:14-15 Living Bible (TLB), Your (God’s) throne is founded on two strong pillars—the one is Justice and the other Righteousness. Mercy and Truth walk before you as your attendants.  King David said here the Lord established His Throne on two pillars—JUSTICE AND RIGHTEOUSNESS, and Mercy and Truth escort the Father wherever He goes. David is declaring God’s concern for justice and mercy as much as His concern for righteousness and truth. David is saying we cannot embrace one and ignore the other. Righteousness without justice has no mercy, and justice without righteousness has no truth. When you place justice and righteousness on equal footing, as God does, you’re balanced and reflecting the Lord’s entire personality.

The sixth and final reason some black Christian conservatives defend, deny, ignore or are indifferent to white supremacy and institutionalized racism is they are partisan-minded, not Kingdom minded. Common sense tells us our hope shouldn’t rest in the Republican or Democrat parties. As Christ followers, we must be committed and beholden to the Kingdom of God solely. God’s Kingdom is the only hope for all humans! God’s Kingdom will be around when the Republican or Democrat Parties are no more.

Regarding whether America could experience an outright race war, let’s look at several facts. First, white American men have waged many race wars. History has shown us they possess no reluctance or aversion to initiating race wars to gain or maintain dominance. They have fought race wars against practically every race of people on the planet. They fought long race wars against Native Americans and Mexicans. They even fought a race war against themselves in the Civil War.

Second, white men have fought multiple race wars against blacks already. For example, white men attacked and destroyed thriving black communities in Tulsa, Brownwood, Little Rock, Harlem, Detroit, and other cities during race wars. Then there was the race war during the Civil Rights movement. Truthfully, white men have never stopped being at war with blacks. They’ve murdered so many blacks we cannot keep count of the bodies. White police officers have also murdered innocent unarmed black men. White men have waged race wars against blacks violently, politically, economically, socially, etc. It has taken many forms over two centuries. To call attention to these race wars is neither stupid, race-baiting or fear mongering. In fact, given the history of America’s race wars, it’s asininity or more willful blindness to argue America couldn’t experience a full-throttle race war. The only reason we haven’t already had a full-throttle race war is black men haven’t fought back. The provocation has been present multiple times.

But if you are still unconvinced that a full throttle race war can happen, read the Bible. It tells us forthrightly there’ll be race wars in the last days. For instance, in Matthew 24:17, Jesus said before He appears nations would rise against nations. He was saying there will be race wars in the last days. Moreover, John the Revelator warns us too that many people will die from violence during the Great Tribulation period. Read Rev. 6:3-5.

In conclusion, we African American men, have a God-given responsibility to protect ourselves, our families and community. We cannot have our heads stuck in the sand following uninformed black conservatives who are blinded by the harsh realities of racism. We live under a president who fans the flames of racism for his own personal political reasons. Furthermore, the country elected and re-elected its first black president, which created great angst in many white men. They are angry because America will be a minority-majority nation soon, and they’ve heavily armed themselves to stop this transformation violently if necessary! It’s foolish or more willful blindness to think white men have armed themselves with AR-15s and other deadly weaponry for mere sportsmanship. We must be like the children of Issachar, which were men that had an understanding of the times, to know what [we] ought to do. 1 Chronicles 12:32.

Not all black Christian conservatives are naïve, extreme, ignorant, willfully blind, duped and so on. Some are principled and strong conservatives who abhor white supremacy as much as anyone. Examples include Bishop Charles Blake, Bishop Paul Morton, Apostle Fred Price, Dr. Dwight McKissick, and many others. These are conscious voices we can trust and follow. They have the appropriate balance of righteousness and justice.